FCS‘s Fight against FGM for a Better Future

Every year, 6th February is recognized globally as theInternational Day of Zero Tolerance for Female Genital Mutilation (FGM). The day aims to create awareness, amplify and direct the efforts on the elimination of this practice by various stakeholders. FGM is recognized internationally as a violation of the human rights of girls and women and is a form of gender discrimination. FGM also violates a person’s rights to health, security and physical integrity, the right to be free from torture and cruel, inhuman or degrading treatment, and the right to life when the procedure results in death.

According to the United Nations, more than 200 million girls and women alive today have experienced FGM in 30 countries in Africa, the Middle East and Asia where FGM is practiced.

FGM is a harmful traditional practice that comprises procedures that involve altering or injuring the female genitalia for non-medical reasons. It is practiced on girls and women between the ages of 0 and18 years.

Over the years, The Foundation for Civil Society (FCS) has been at the forefront in the fight against harmful traditional practices that undermine women and girls in Tanzania through providing organizations at national and grassroots levels with grants and capacity development to implement such interventions. Areas that FCS is supporting interventions where the practice is still prevalent are Manyara, Dodoma, Arusha, Mara, and Singida. 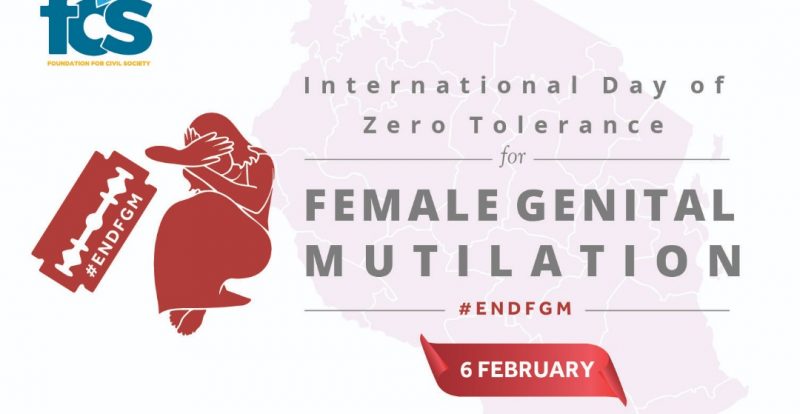 Why is FGM performed?

The practice is deeply rooted as a social norm that perpetuates gender inequality. In some cases, the practice is seen as a rite of passage into womanhood, while others see it as a way to suppress a woman’s desire for sex. Many communities practice FGM in the belief that it will ensure a girl’s proper upbringing, future marriage or family honor. Some also associate it with religious beliefs, although no religious scripture approves it.

The global community has set a target for the abandonment of FGM by the year 2030 as part of the Sustainable Development Goals (SDGs).

Giving Girls the Power of Their Voice

Our grantee, Stars of Poverty Rescue Foundation (SPRF)has been implementing the AWARE project in Ikungi District in Sindiga Region since 2018 to empower women and girls by educating them on their rights and laws governing harmful practices through the formation of Women Voice Club (WVC) and Student Voice Clubs (SVC).

WVC and SVC give women and girls a voice to participate in decision-making processes in their communities in fighting against FGM. Members are taught about the laws governing various harmful practices and they use the knowledge of these laws in their advocacy at the community level.

The interventions have resulted in the formulation of more than 80 students (Agents of Change) debate groups of 20 students in each school in the Ikungi District. The aim was to put the AWARE project in the young people’s hands; spreading the news to fellow students, families, and communities on the effects of FGM. The SPRF works with Local Government Authorities (LGAs) in the anti-FGM campaigns. Forty traditional leaders, religious and village social welfare baraza leaders joined the anti-FGM campaign due to SPRF interventions.

Through the use of SMS tracking systems by using mobile phones, it was communicated to Empowered Society Transform Lives (ESTL)that one of the girls aged about 2 years, and another 18 months, were genitally mutilated. The two-year-old girl became seriously ill and hospitalized at a district hospital but the mother did not disclose the cause of the wound the child was born. The ESTL reported the matter to the police who took action by arresting the traditional “surgeons” (ngaribas) who had carried out the “cut” on the little girl. They were soon arraigned, found guilty and sent to prison.

Kick FGM Out of Singida is a project  implemented by ESTL with grant support from FCS. The project  aims at raising awareness, influencing attitudes and promoting behavioral change towards FGM among communities that entertain this harmful traditional practice.

Kick FGM Out created anti-FGM platforms, developing capacities of the local government structures to address FGM and mobilizing communities in the Singida Region to advocate the rights of girls and women with a view to completely abolishing FGM practices.

At Karansi Secondary School, the UWAZI Club succeeded in rescuing a fellow student whose parents wanted her to undergo FGM. From her previous point of view, FGM was normal practice as per Maasai traditions. This changed when she joined the club and came to realize the adverse effects of the practice. To start with, she rejected the initiation ritual as proposed by her grandmother, then reported her situation to her club teacher. The teacher discussed with the grandmother the effect of FGM and later summoned the student’s parents to school for more discussions. The UWAZI Club is a result of interventions by Kilimanjaro Women Information Exchange Organisation (KWIECO).

Having a background of rescuing children from HTPs and sheltering them at Masanga Centre, the Association of Termination of Female Genital Mutilation (ATFGM)came up with the idea of involving various stakeholders such as LGA members, the Police, religious leaders, traditional leaders and representatives from local CSOs to discuss the best approach for implementing this project. Issues such as how to block the escape by perpetrators of HTPs/GBV cases are discussed.

A total of 25 members were carefully selected from 25 villages and after they were taken through special training, they are now helping in reporting claims/cases of HTPs/GBV that occur in their villages. Members of these task forces use mobile phones to report to ATFGM any claim they receive and the ATFGM Programme Coordinator contacts the police force gender desks and together they move to go investigate and take the necessary action.

Between January and June 2018, three unexpected cases were reported from the task force. Among the 27 cases reported; 7 have already been settled (3 were those of marriage conflicts, 3 involved FGM and 1 was about land ownership). Village representatives have reported 20 cases (5 on marriage conflicts, 3 on FGM, 8 on rape, 7 on early child marriages and 1 on land ownership and 3 on child house confinement).